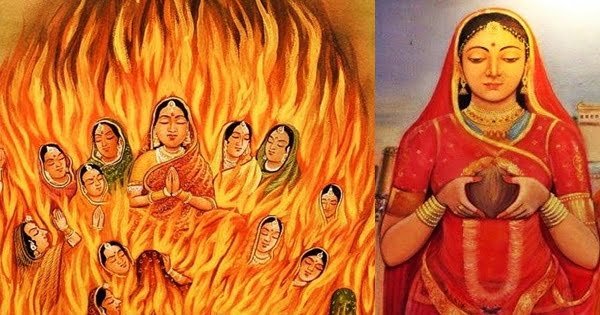 Rani Padmini, a beautiful princess of Ceylon, was fictionalized in a poetic account “Padmavat” written by Malik Muhammad Jayasi in 1540 CE. According to various myths and legends and also in popular folklore she, because of her profound beauty and intellect, becomes the cause of the battle between Guhilot king Rawal Ratan Singh and the famous Delhi Sultan- Alauddin Khilji. Also, Khilji at that time pursued the policy of territorial expansion and wanted to capture Chittor as it came in the way of his reaching to Malwa.

The question is whether such beauty did indeed exist or was she a mere fiction of writer’s pen? Was she one of the cause for why Alauddin Khilji attacked Chittor? And if so, then what was the reason behind it?

Malik Muhammad Jayasi, a famous Sufi Indian poet, wrote the epic poem “Padmavat” in 1540 CE. According to Jayasi’s text, she was an exceptionally beautiful princess of Singhal Kingdom. Rawal Ratan Singh, a valiant ruler of Chittor, learned about her beauty from a parrot. He went to Ceylon in a mendicant’s dress and succeeded in winning her love. She was then brought to Chittor.

Raghavdev or Raghav Chetan was a sorcerer in Rawal’s court and was once caught red-handed while performing some sort of black magic. For this, he was expelled from the court and even from the territory of Chittor. Raghav Chetan then decided to take revenge and also cursed that Chittor will be soon destroyed completely. He then went to Alauddin Khilji to report him about the most beautiful thing of this world, that is, Rani Padmini. Khilji, who wanted to conquer the whole of India, got infuriated by his explanations and thus found an additional cause to invade Chittor. On finding the fortress of Chittor impregnable, he sent a message to Rana that if Padmini’s reflection would be shown to him in the mirror he would return back to Delhi.

Rana agreed to gratify Sultan’s wish. When Sultan was returning back after seeing the reflection of Rani, Rana accompanied him to the gate of the fort. This provided an opportunity to Sultan to treacherously imprison Rana and then he was carried to Delhi. From Delhi, Sultan sent a word to Rani Padmini that her husband would be released only if she chose to come into his harem.

Rani agreed, and under the leadership of Gora and Badal with 1600 covered litters and armed warriors Rajput army reached to Delhi. After reaching there they demanded private interview of Rani with Rana, Sultan agreed and warriors successfully managed to somehow rescue Rana from the palace. This was followed by a deadly battle in Chittor in which Gora and Badal and Ratan Singh himself died. Rani Padmini committed Jauhar and fort of Chittor was seized.

According to historians, the siege of Chittor in 1303CE is a historical event but the legend of Padmini wherein Sultan lusted for the queen has a little historical basis. The earliest source to mention Chittor siege- “Khazian-ul-Futuh” written by Amir Khusrau do mention siege of Chittor but makes no mention of Rani Padmini.

Moreover, the account written by Jayasi is a late century work and is also a fictional romantic account rather than authenticate the literary account. That’s why it led critics to state that Padmini’s story is a fiction intermixed with romantic and adventurous tales.

But if it is a mere fiction then why it gained so much popularity? The fact cannot be rejected that traditional loves have some historical background and they cannot be completely denied. The question remains unanswered as the truth only lies beneath the pages of history!

NASA has been showing a steadfast improvement in the field of space technology. Not...
Previous articleJimmy Hoffa: A lost labour union leader
Next articleWas Adolf Hitler’s suicide a facade?
© Newspaper WordPress Theme by TagDiv