Is Iraq A Hub For Aliens? 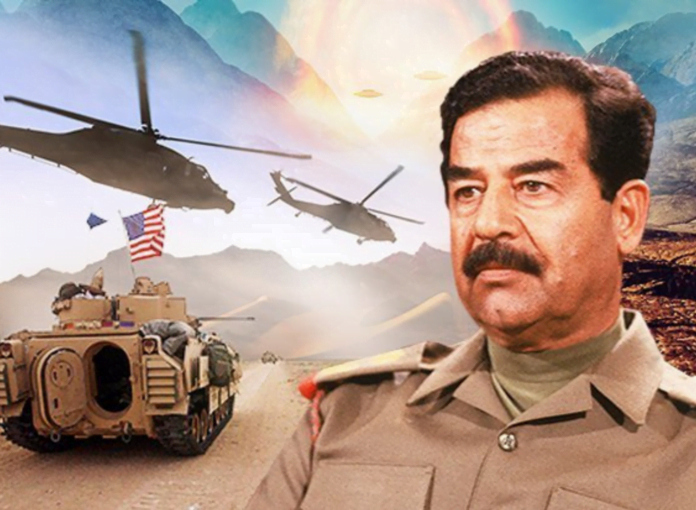 America’s deep-rooted interest in Iraq has been a cause for debate and conspiracy theories alike for many years now. Ever since its attack on Iraq in 2003, more and more theories have emerged. Have you wondered what the real cause for this could be? Was it their oil reserves, maybe they wanted to dethrone Saddam Hussein as he had made Iraq a major ally of Al-Qaeda, the terrorist organization?

Have you ever thought in even your wildest fantasies that the reason for this invasion could be the aliens? The extraterrestrial zone? The undiscovered 10th planet?

Table of Contents show
1 How Did It All Start?
2 The Home Of These Aliens
3 Discovery Of The Star Gate
4 Link To Saddam Hussein
5 An Attack By The West
6 Rise Of The Islamic Group

How Did It All Start?

It all started way back in around 3000 BC. There were these “Sumerians”  who lived in Mesopotamia, a land that covers a portion of modern-day Iraq.

The Sumerians used to worship the Anunnaki, their deities. Sumerians were one of the first civilizations on Earth. Hold up! Because our history is about to turn into some Hollywood, sci-fi, supernatural big-time hit!

It was believed that these deities weren’t actually humans. These were extraterrestrial space snobs, a.k.a., aliens. They were very impressed with the devotion of the Sumerians. The theory a lot of observers give behind the advancement and the cutting-edge technological stuff the then Iraq was blessed with was the technology and powers these deities-cum-aliens presented the Sumerians with. How cool is that?

The Home Of These Aliens

He was said to have been connecting with aliens from a tenth planet, Nibiru-unknown to the world- in our solar system, which has always had an amicable relationship with the Middle East people.

Nibiru is said to revolve in a highly eccentric orbit which sometimes comes dangerously close to the Earth, somewhere between Mars and Jupiter and the other times, it gets lost somewhere in outer space. All this was first claimed by the astronomers- Chad Trujillo and Scott Sheppard, who claimed to have seen a planetary body lurking on the outer layer of our solar system.

The mythical planet of Nibiru was thought to be the home of these aliens who came and blessed Iraq with technology in return for worship.

Discovery Of The Star Gate

The aliens bestowed upon the people many technologically advanced instruments, one of them are said to be the Stargates. What is a Stargate? It’s sort of a space-time means of travel that could instantly teleport you to any place in the extraterrestrial world, no matter what the distance is. It was said that there are many Stargates yet to be found all around the world.

But the Stargate which was apparently discovered was around 370 km from Baghdad- in a city known as Ur- within the great Ziggurat temple. Was it a coincidence? Was God really watching? Well, it was the temple of the same Anunnakis who were believed to be aliens!

Now, one of these Stargates was also claimed to be found in the basement of one of Saddam Hussein’s palaces in Baghdad. He was an Iraqi politician and the fifth president of Iraq. He was assumed to have done some really crazy, scientist-y stuff down there.

He was supposedly planning an alien invasion to destroy each and every man on the Earth. These teleport services and outer space have always been of a great deal in human politics. These claims were a big part of the theory that around 200 aliens known as Nephilims rebelled against their superiors- “Elohims”. Then, the USA and Britain contacted Saddam and the Stargate, which possibly created the early civilization on Earth.

So, Saddam was collaborating with the alleged aliens. The world first got distressed over the news of Saddam restoring the Ziggurat temple in the 1980s. Now, the Bush administration from America comes into the picture. Michael Salla, the self-styled Australian expert on exopolitics- political science on alien-human interaction, was very adamant on this theory. “Either Saddam got the Stargate working, or he found some very, very relevant information about the ancient history of this planet” – so he claimed in an interview.

An Attack By The West

Either way, America got concerned. Hussein was just one step away- a text or a telegram, maybe?- from confirming this news, and he was about to go public. So, the superpower interfered and invaded Iraq under the pretext of possession of weapons, chemical or biological, world destruction and Saddam’s alleged connections with Al-Qaeda, the terror group.

The west wanted to dethrone the dictator and seize the portal to Nibiru. This was Salla’s theory of the Iraq invasion. He claimed that there are currently as many as 17 extraterrestrial civilizations that are in direct contact with humans. More than one million Iraqis were killed during this invasion.

Rise Of The Islamic Group

True or not, one thing is confirmed that all these happenings led to the rise of the Islamic Group, with the help of its parent organization, Al-Qaeda. Moreover, the weapons claimed were never conclusively found. How can such great executive authorities take such a silly step without any conclusive evidence? Was it really a threat to humanity and humankind? Or just a façade to capture that priceless portal and prevent the civilization from knowing the ancient truths?

Well, if you want any visuals on it, you can relish the 90s superhit, STARGATE, starring Kurt Russell.

This was, however, nothing different from present times. The world is in chaos, and people are fulfilling their crazy fetishes through ridiculous theories on how the coronavirus has spread. Naturally, many of them blame 5-G . Like how the 5-G has weakened our immune system or how it’s all pre-planned by some masterminds who wanted to get a chip in people through mass vaccination, which will enable them to track our every step through 5-G. It’s all heart and gold for a good laugh and some mind-boggling suggestions on thriller conspiracies on Netflix.

The truth of Iraq, however, is still not clear. If the West attacked it to seize control over an alien portal, then we can be sure that they will try their best to keep it hidden.

NASA has been showing a steadfast improvement in the field of space technology. Not...
Previous articleWhat Is Under The Ice In Antarctica, More Ice Or More Mystery?
Next articleIs Donald Trump A Time Traveller Or An Illuminati?
© Newspaper WordPress Theme by TagDiv