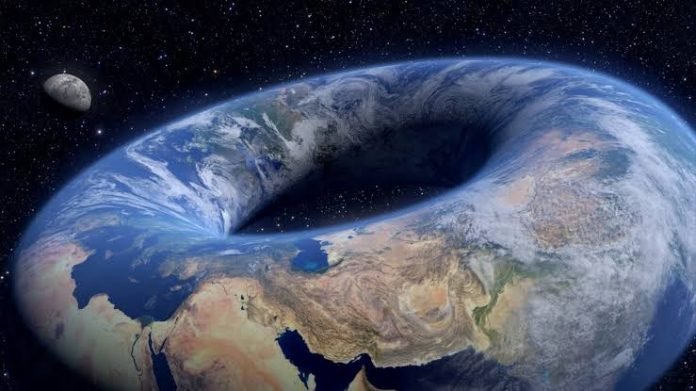 The Simulation Hypothesis Or The Reality?To all of those who think flat earth theory is one of the craziest and unbelievable theory about our planet earth, then here’s another one to blow your mind and wonder how some people in the different corners of our planet can come up with these complicated and crazy theories. I mean, I can’t imagine myself sitting idle and thinking about whether our planet is hollow from the inside or not, that’s not what normal people do, I suppose. Anyway, we’re still going to dive into this topic because anything related to planets and the space is interesting and mysterious.

The Hollow earth theory was introduced to the world by Rodney Cluff when he wrote his book, yes, a BOOK called ‘World’s top secret: Our Earth is Hollow!’ I bet you would’ve never heard of a book before which is dedicated to a conspiracy theory other than this one.

The author was so devoted to this belief of his that he planned a voyage to the hollow earth from Russia on an icebreaker ship to find an opening at the north pole. Unfortunately the expedition was canceled as the theory is quite unbelievable and why would anybody allow somebody to go on a voyage to the poles that is based off a theory.

The cancellation of the trip did not dampen the growing popularity of this book based theory. The author was pretty confident that people are believing in what he has written as he was getting emails from the ones who supported his idea.

People started believing that there’s an opening at the poles of our planet which leads to the hollow part where the Nazis of the second world war, the lost vikings of Greenland and the lost tribes of Israel are believed to be the rulers.

The author also says that there is an interior sun inside with a division of the night and day side which is the source of light for the people living there.

Few people have claimed to travel to the inner earth and they described the land as the ‘Garden of Eden.’ They say that it is a beautiful paradise to live in. They also had a few things to talk about the people living there. The ‘Superhumans’ as described by the people who saw them are 12 feet tall human beings who have become immortal. These human beings who belong to the Nazis, Vikings and tribes of Israel consider themselves as the ‘Guardians of the planet’, they come outside in the real world once in a while in their supposed spacecrafts and aircrafts to keep an eye on the working of the world. All the UFO’s and the space crafts come from the hollow earth according to the theory. (That means there are no aliens in this theory’s universe?)

The civilization inside is said to be peaceful and isolated through this the people have gained their immortality.

You would probably go and search for either of the poles on Google Maps after you’re done reading this but before that, let me tell you that you won’t be able to see any of the evidence online. Why? You ask? Because NASA has hidden any of the evidence that support the idea of hollow earth through their controlled resources, one of them being Maps. (Yes, NASA has a dark side) But like Humans, NASA also makes mistakes.

In the picture, if you see clearly you can figure out that the slightly more grey cloud which is exactly on top of the pole looks like its photoshopped. It seems like they’re trying to hide something from the world but obviously failed to do so.

There are more pictures from the past when photoshop didn’t exist showing the obvious existence of the hole or the entrance to the hollow part.

After looking at these pictures and maybe after knowing about this theory, don’t you think it is horrifying to even think about what else the world can contain or has for us in store that the higher authorities don’t want us to know, it can literally create or destroy the history or future of our world.

In the past few months, you must have heard the word “QAnon” quite a lot. With the ongoing pandemic and the elections in the...
Read more

Alexa! Tell Us The Truth- How Creepy is the Smart Speaker?

What is Amazon Alexa? Amazon Alexa or Alexa is a smart speaker developed by Amazon. It lets you speak your wishes and see them fulfilled...
Read more

Seth Rich, 27, was an employee of the Democratic National Committee. He was murdered...
Previous article
The Berwyn Mountain UFO speculation.
Next article
Was Vincent Van Gogh a Scottish dealer?
Conspiracy theories