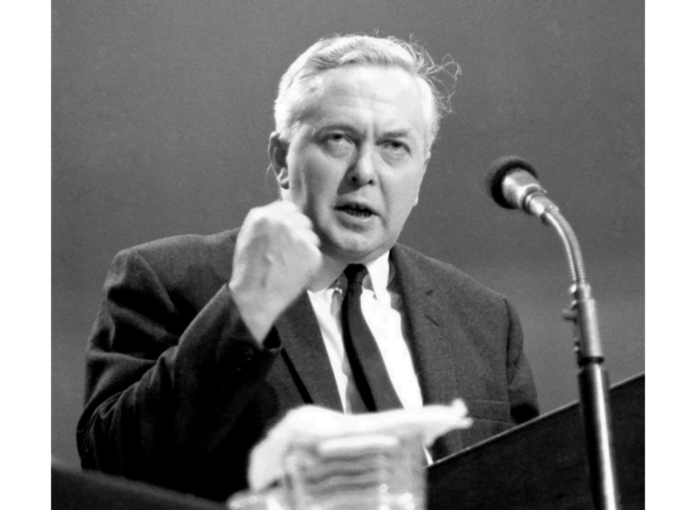 Harold Wilson was one of the most celebrated politicians of his time. He dealt with a number of issues while holding his position of the Prime Minister of England, while also being in good relations with the Crown. Needless to say, such a designated position comes with a lot of conspiracies and plots against such politicians actively functioning behind masked faces.

One such conspiracy theory revolves around UK, US and half of Europe that Harold Wilson, who held the position of the UK Prime Minister from 1964-70 and 1974-76, is a spy deployed by the Soviet Union in the UK politics and that he continued to infiltrate the private data of Britain in order to gain publicity in the Soviet Union leadership. Let’s see if this theory hold any water.

Table of Contents show
1 The Background of Harold Wilson
2 Arguments That Support These Allegations
3 How Real Are The Theories?
4 Conclusion

The Background of Harold Wilson

It all started with Anatoliy Golitsyn, a Soviet defector. He supposedly told a British intelligence officer that the Prime Minister, Harold Wilson, is a KGB (the secret intelligence services of USSR) spy who was installed in the Labor Party of Britain, having followed the assassination of former Labor Party leader, Hugh Gaitskell, who was allegedly a “snob” having good intentions for USA at heart.

This was all backed by the decision taken by Harold Wilson during the US- Vietnam War. It could not go without notice how the UK eliminated their support from the USA in times of need. Although, Harold’s reaction to these allegations was that he’s being “targeted” and it is the work of the CIA, America’s counter-intelligence service, to dethrone him.

Arguments That Support These Allegations

The memoir “Spycatcher” written and illustrated by a bright officer of MI5, Britain’s security service, Peter Wright vividly mentions the meetings between him and the head of CIA’s counterintelligence department, James Angleton in which it was revealed, during 1964 general elections, that Harold Wilson was, in fact, a Soviet Union spy.  He would have divulged more information, had MI5 agreed to restrict the given information instead of outsourcing it.

Another feather in Wright’s cap was his writings on information received by MI5 through two Czechoslovak defectors Josef Frolík and František August, that the Labor party of the United Kingdom has most certainly been infiltrated by the Soviet Union members. They gave MI5 a list full of names related to MPs-cum-Soviet spies of the party.

There is no evidence whatsoever to support these arguments. These are just out rightly spoken, mere statements. MI5 denied these claims by mentioning “Wright” as an “unreliable” source and this theory as a “gone” cause.

How Real Are The Theories?

As far as Hugh Gaitskell’s death is concerned, the reports show that he had fallen ill before his Moscow trip, but had gotten the green signal to travel nevertheless. On his return journey, his health collapsed and he died of an autoimmune viral disease. One can see how little credible Anatoliy Golitsyn’s claims are. The story of Harold Wilson assassinating Hugh Gaitskell, is far-fetched and most probably a fabricated story.

Now, let’s come to the MI5 officers’ story. After Wright’s allegations, MI5 conducted an aggressive, in-depth investigation to see if the PM turned Soviet spy story was true. To ensure Wilson’s innocence, they even bugged Number 10, Downing Street,  Wilson’s residence. No evidence came into light which indicated Wilson’s hand in any wrongdoing.

In 1977, the bugs came into the knowledge of the general public and were removed on presidential orders. Wilson was questioned over several decades only to get acquitted from all the charges and allegations. They even maintained a full-fledged file on him that shows the absence of any evidence to support the theory.

Moreover, Margaret Thatcher, an arch-enemy of Wilson’s policies reported to the parliament on how she had received Wilson’s files on the whole matter and her security services assured her that there was no proof to prove the Wilson-soviet link-ups. Well, one cannot possibly decipher why Thatcher would side with Wilson, assuming he had done something wrong.

Now, there were rumors that Wilson stepped down due to the pressure of MI5, the Parliament and the Crown. In reality, Wilson was suffering from early signs of Dementia. It was his wish to step down while he was still prim and proper. He had lived gloriously throughout his reign and eventually died of his disease.

To feel the jitters, you can binge the finest series on Netflix, THE CROWN. It conceptualizes a quality picturisation of Harold Wilson being accused of concealing his real identity, a Soviet spy.

Enough facts and evidence are there to prove that Harold Wilson was an honorary citizen and capable Prime Minister of a great country.

But conspiracy theories have always been mind-boggling that one wishes to ignore due to the havoc these can wreck, if there’s even a grain of truth in them. Even if the KGB were infiltrating the Labor Party, they would do everything to prevent their cover from being blown, don’t you think?

Existence Of Aliens On The Moon: An Unanswered Mystery

NASA has been showing a steadfast improvement in the field of space technology. Not...
Previous articleDeath Of Nelson Mandela And The Existence Of The Multiverse
Next articleIs Angela Merkel A Reptiloid! – Unravelling The Reptilian Ruler
© Newspaper WordPress Theme by TagDiv